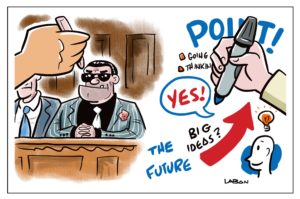 When I tell people about graphic recording they often ask is if it’s like being a courtroom sketch artist. The answer is, not really.

Courtroom artists don’t try to record everything that happens at a trial. Instead, they produce a few representative drawings to serve as a record when photos and video aren’t allowed.

Graphic recorders, on the other hand, try to capture the bulk of what’s said at events using both text and images. And they don’t just record the words and ideas–they also visually interpret them, which makes the information easier to understand and remember.

But in at least one important way, graphic recorders and courtroom sketch artists are alike: both capture what would otherwise be lost. For the courtroom artist, it’s pictures of a trial that can’t be photographed. For the graphic recorder, it’s the unplanned aspects of an event.

Along with details of speeches and Powerpoint presentations, graphic recording captures a speaker’s off-the-cuff comments or an audience’s questions. What’s more, the images, design, and colors a recorder uses to create a chart can capture something of the feeling in the room as well.

By representing the totality of what happened instead of only what was planned, graphic recording captures what would otherwise be lost, extending the experience and making more of it meaningful. Adding meaning adds value. And more value is what everyone wants!